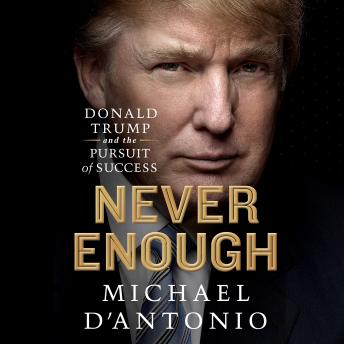 Never Enough: Donald Trump and the Pursuit of Success

In the summer of 2015, as he vaulted to the lead among the many GOP candidates for president, Donald Trump was the only one dogged by questions about his true intentions. This most famous American businessman had played the role of provocateur so often that pundits, reporters, and voters struggled to believe that he was a serious contender. Trump stirred so much controversy that his candidacy puzzled anyone who applied ordinary political logic to the race. But as Michael D'Antonio shows in Never Enough, Trump has rarely been ordinary in his pursuit of success and his trademark method is based on a logic that begins with his firm belief that he is a singular and superior human being.
As revealed in this landmark biography, Donald Trump is a man whose appetite for wealth, attention, power, and conquest is practically insatiable. Declaring that he is still the person he was as a rascally little boy, Trump confesses that he avoids reflecting on himself 'because I might not like what I see' and he believes 'most people aren't worthy of respect.'
A product of the media age and the Me Generation that emerged in the 1970s, Trump was a Broadway showman before he became a developer. Mentored by the scoundrel attorney Roy Cohn, Trump was a regular on the New York club scene and won press attention as a dashing young mogul before he had built his first major project. He leveraged his father's enormous fortune and political connections to get his business off the ground, and soon developed a larger-than-life persona. In time, and through many setbacks, he made himself into a living symbol of extravagance and achievement.
Drawing upon extensive and exclusive interviews with Trump and many of his family members, including all his adult children, D'Antonio presents the full story of a truly American icon, from his beginnings as a businessman to his stormy romantic life and his pursuit of power in its many forms. For all those who wonder: Just who is Donald Trump?, Never Enough supplies the answer. He is a promoter, builder, performer and politician who pursues success with a drive that borders on obsession and yet, has given him, almost everything he ever wanted.

Never Enough: Donald Trump and the Pursuit of Success