Never Give In: The Best of Winston Churchill 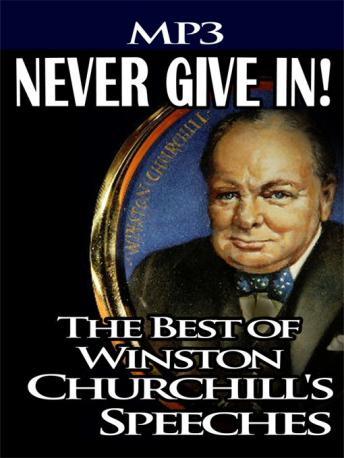 Who can forget the words "We shall fight on the beaches. We shall fight on the landing grounds. We shall fight in the fields, and in the streets, we shall fight in the hills. We shall never surrender!" They were uttered in 1940 by one of the 20th century's greatest orators, Winston Churchill, eager to spur on his countrymen in their fight against Nazi Germany. Now the great man's grandson has gathered Churchill's most memorable words, spanning more than half a century, in times of war and in times of peace. Part of Churchill's gift, his grandson writes, was his ability to address his radio listeners "not as unseen masses but as individuals-he envisioned his audience as a couple and their family gathered around their coal fire in the cottage-home." Any admirer of Churchill's will want to add this CD to their library.

Never Give In: The Best of Winston Churchill