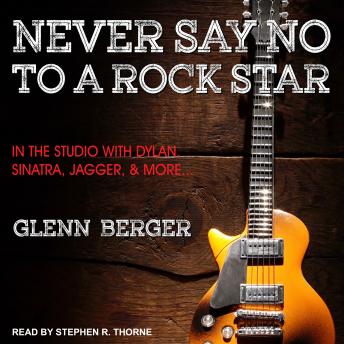 Never Say No To A Rock Star: In the Studio with Dylan, Sinatra, Jagger and More...

In 1974, at the age of seventeen, author Glenn Berger served as 'schlepper' and apprentice to the legendary recording engineer Phil Ramone at New York City's A&R Studios, and was witness to music history on an almost daily and nightly basis as pop and rock icons such as Paul Simon, Bob Dylan, Mick Jagger, Frank Sinatra, Burt Bacharach, Bette Midler, and James Brown performed their hit-making magic, honed their sound, strutted their stuff, bared their souls, and threw epic tantrums. In this memoir, full of revelatory and previously unknown anecdotal observations of these musical giants, Berger recounts how he quickly learned the ropes to move up from schlepperhood to assistant to the tyrannical Ramone, and eventually, to become a recording engineer superstar himself. Not only is Never Say No to a Rock Star a fascinating, hilarious, and poignant behind-the-scenes look of this musical Mecca, but Berger, now a prominent psychologist, looking back through the prism of his youthful experience and his years working as a counselor and therapist, provides a telling and honest examination of the nature of fame and success and the corollaries between creativity, madness, and self-destruction.

Never Say No To A Rock Star: In the Studio with Dylan, Sinatra, Jagger and More...