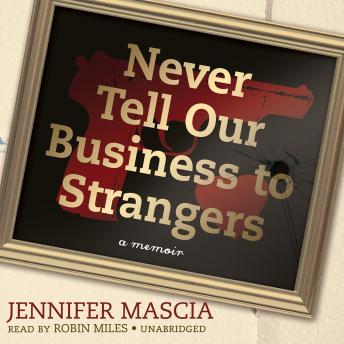 Never Tell Our Business to Strangers: A Memoir

When Jennifer Mascia is five years old, the FBI comes for her father. At that moment Jenny realizes that her family isn't exactly normal. What follows are months of confusion marked by visits with her father through thick glass, talking to him over a telephone attached to the wall. She and her mother crisscross the country, from California to New York to Miami and back again. When her father finally returns home, months later, his absence is never explained-and Jenny is told that the family has a new last name. It's only much later that Jenny discovers that theirs was a life spent on the lam, trying to outrun the law.Thus begins the story of Jennifer Mascia's bizarre but strangely magical childhood. An only child, she revels in her parents' intense love for her-and rides the highs and lows of their equally passionate arguments. And then there are the oddities that Jenny notices only as she gets older. When she, at twenty-two, uncovers her father's criminal record, more questions are raised. By then he is dying of cancer, so she presses her mother for answers, eliciting the first in a series of reluctant admissions about her father's criminal past. Four years later, Jenny is made privy to one final confession that sets her on a search for the truth her mother fought to conceal for so many years. As Jenny unravels her family's dark secrets, she must confront the grisly legacy she has inherited and the hard truth that her parents are not-and have never been-who they claimed to be. In the face of unimaginable tragedy, Jenny will ultimately find an acceptance and understanding just as meaningful and powerful as her parents' love.In a memoir both raw and unwavering, Jennifer Mascia tells the amazing story of a life lived-unwittingly-with criminals. Full of great love and enormous loss, Never Tell Our Business to Strangers will captivate and enthrall, both with its unrelenting revelations and its honest, witty heart.

Never Tell Our Business to Strangers: A Memoir