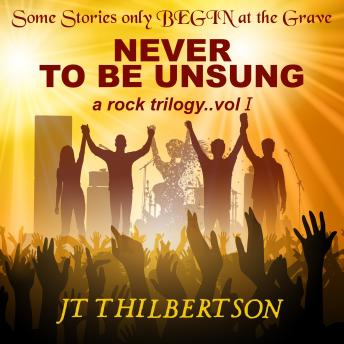 Never to be Unsung, a rock trilogy, Volume 1

1972...
After eight years of more on the road than off, seventeen year old Ashley Maddox, the daughter of widowed British shock-rocker, Eddie 'Maddman' Maddox' is desperate to escape her Father's, 'Roving Repunzel's Tower', and come off the road. Determined to experience a taste of normal life before the last of her childhood slips away , she finally snips Eddie's parental puppet strings, leaving him holding an empty line for three days.
Citing ancestral ties to the area, she devises a plan to persuade Eddie to plant her in the city of Annapolis, Maryland in The States. There, she finds love, cultivates a circle of best mates, (who soon dub her, 'Moxie'), with whom she begins to launch her own music career.
Moxie, howerver, is harboring a fatal flaw which will shave years off of her life. When the enevidable happens at the starting gate of her career, her surviving bandmates conspire with her closest mate in England to attempt the unheard of: Hang her fallen star. Slowly, Moxie's earthly allies begin to realize that although everyone must die, some may not necissisarily lie down...entirely, that is.
Follow this musical romantic dramedy, as unlikely worlds collude in an effort to hang the Grim Reaper in effigy... on his own front porch!

Never to be Unsung, a rock trilogy, Volume 1