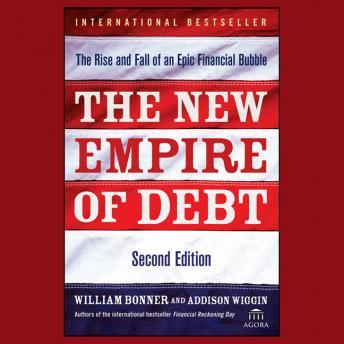 The New Empire of Debt: The Rise and Fall of an Epic Financial Bubble

"The Golden Age of American capitalism is over. ...In the space of half a century it passed from gold, to silver, to paper, and is now somewhere between plastic and navel lint."- From The New Empire of Debt
In the last half of 2008, the Empire of Debt received the margin call from Hell. Now, all of its citizens are asked to pay up as the U.S. economy stumbles down a dangerous path of financial turmoil. What exactly went wrong?
When things are good, people tend to believe the most outrageous things-that the financial sector could get rich by lending money to people who couldn't pay it back, and that a whole economy could flourish by luring consumers to spend more than they could afford. These hallucinations created an immense worldwide bubble of debt and dollars. And now-with the U.S. government inflating the biggest bubble in public debt the world has ever seen-a financial whirlpool has formed and threatened to drag the entire country down the drain.
In The New Empire of Debt, the internationally acclaimed author team of William Bonner and Addison Wiggin return to reveal how the epic financial bubble that is plaguing the United States will soon bring an end to this once great empire. They offer a frightening look at the United States' precarious position and discuss how government control of the economy and financial system-combined with unfettered deficit spending and gluttonous consumption-has ravaged the business environment, devastated consumer confidence, and pushed the global economy to the brink. They warn of the dangers that lie ahead and offer practical advice to protect your financial well-being as the American empire collapses upon itself. You'll discover that you don't have to tie your own fate to the inevitable destruction of America's system of imperial finance. Instead you can take some simple steps to weather the crisis.
Bonner and Wiggin have been studying the financial landscape for more than twenty years. Now, they not only show you how we got into this mess, but how to get yourself out of it.

New Empire of Debt: The Rise and Fall of an Epic Financial Bubble