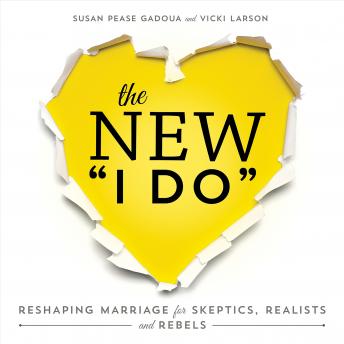 The New I Do: Reshaping Marriage for Skeptics, Realists and Rebels

If half of all cars bought in America each year broke down, there would be a national uproar. But when people suggest that maybe every single marriage doesn't look like the next and isn't meant to last until death, there's nothing but a rash of proposed laws trying to force it to do just that.
The New I Do, therapist Susan Pease Gadoua and journalist Vicki Larson take a groundbreaking look at the modern shape of marriage to help readers open their minds to marrying more consciously and creatively. Offering actual models of less-traditional marriages, including everything from a parenting marriage (intended for the sake of raising and nurturing children) to a comfort or safety marriage (where people marry for financial security or companionship), the book covers unique options for couples interested in forging their own paths.

With advice to help listeners decide what works for them, The New I Do acts as a guide to thinking outside the marital box and the framework for a new debate on marriage in the 21st century.

New I Do: Reshaping Marriage for Skeptics, Realists and Rebels