The New Stories of Old-Time Radio: Volume One, Set One 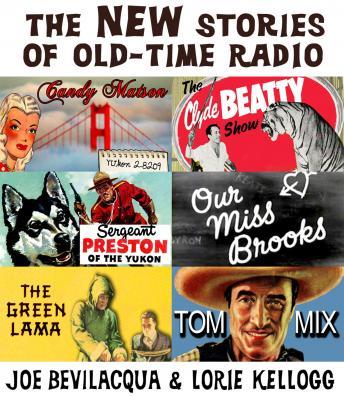 "THE NEW STORIES OF OLD TIME RADIO Volume One, Set One, produced, directed and voiced by Joe Bevilacqua, with Lorie Kellogg.
The first anthology of NEW fiction based on the beloved OTR characters and shows we know and love. Old Time Radio fans have something new to listen to!

Includes:
Our Miss Brooks - ""One Principal Too Many, One Principal Too Meanie"" by Clair Schulz
Tom Mix - ""Tom Mix And The Mystery Of The Bodiless Horseman"" by Jim Harmon
Candy Matson YUkon 2-8209 - ""The Japanese Sandman"" by Jack French
The Clyde Beatty Show - ""Perils of the Tiger Barn"" by Roger Smith
The Green Lama - ""The Case Of The Bashful Spider"" by Bob Martin
Sgt. Preston of the Yukon - ""A Call From the Storm"" by Jim Nixon

""These are not old time radio shows, but incredible simulations!"" beams veteran award winning radio producer Joe Bevilacqua, who voiced most of the audio book, including dead-on impressions of Paul Frees as The Green Lama, Gale Gordon as Mr. Conklin, Richard Crenna as Walter Denton, Paul Sutton as Sgt. Preston, and even essays some of the woman roles including the voice of Candy Matson! For the woman roles Bevilacqua could not voice, he turned to his talented wife and creative partner, Lorie Kellogg, who has acted in many of his radio theater productions in the past. Kellogg is the voice of Eve Arden's Connie Brooks in the new ""Our Miss Brooks"" story, as well as voicing her landlady Mrs. Davis, Clyde Beatty's wife and other roles.

""OTR fans tired of listening to the same old recordings over and over will love these new audio stories!"" concludes Bevilacqua. ""Joe Bev."" (as he also known) is a veteran radio drama producer, whose past credits include XM Radio's The Comedy-O-Rama hour, The Misadventures of Sherlock Holmes, and Old-time Radio Parodies.

New Stories of Old-Time Radio: Volume One, Set One