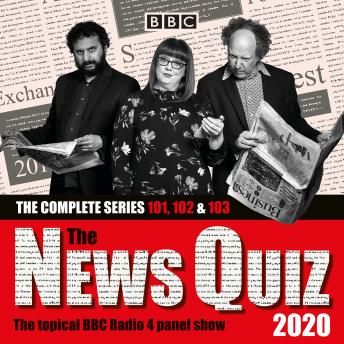 Since 1977, The News Quiz has entertained the nation with its satirical take on contemporary events. In these three series from 2020, hosts Nish Kumar, Angela Barnes and Andy Zaltzman invite a panel of comedians and journalists to find the funny behind the headlines (a tricky task in this difficult year). Regular players including Mark Steel, Lucy Porter, Hugo Rifkind and Kerry Godliman rub shoulders with newer contestants such as Geoff Norcott, Sophie Duker, Sindhu Vee, Jess Fostekew, Daliso Chaponda and Athena Kugblenu.

In Series 101, among the subjects unpicked by Nish Kumar and guests are Brexit Day, the Big Ben Bong brouhaha, Harry and Meghan's 'Sussexit', Labour's leadership election and the advice from the WHO about coronavirus...

As lockdown hits, Angela Barnes sets up her home studio/duvet fort to host Series 102 without a live audience, posing cryptic questions on such Covid-related topics as social distancing in sport and Dominic Cummings' Barnard Castle trip, as well as Donald Trump's 'Death Star' and the Black Lives Matter protests.

Series 103 sees chairman Andy Zaltzman and the team broadcasting online via Zoom, with added audience participation and aided by a 'cyber satirist'. They chew over issues including the Last Night of the Proms controversy, record-breaking sheep, the Rule of Six and breaking international law - but only in a limited and specific way.