The News Quiz: A Vintage Collection: Archive highlights from the popular Radio 4 comedy 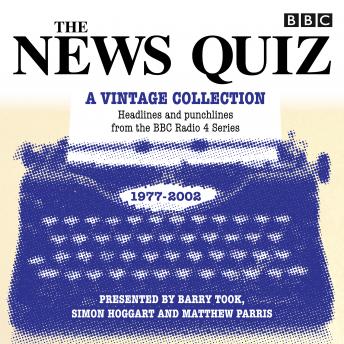 The News Quiz made its debut on Radio 4 in 1977, and four decades later it’s still playfully making and breaking the headlines of our daily news.

Among the vintage gems in this collection are 25 Years of the News Quiz, in which Alan Coren, Andy Hamilton, Jeremy Hardy, John Sergeant, Linda Smith and Francis Wheen take a trip through a quarter of a century of headline news, with Radio 4 newsreaders providing cuttings (and giggles) from 1977 to 2002. Meanwhile The Archive Hour: Headlines, Deadlines and Punchlines, presented by Matthew Parris, features interviews with chairmen and panellists past and present including Barry Norman.

If you enjoy your news humorously grilled, with a side order of biting wit, this vintage collection is highly recommended.


Some of the humour on this release reflects the era in which it was first broadcast.