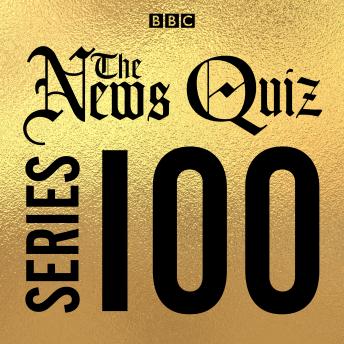 It’s the one hundredth series of The News Quiz – let the centennial celebrations commence! To mark the occasion, each of these eight episodes is presented by a different guest host from the world of comedy, who keeps the chair warm in their own inimitable style (and with their cushion of choice).

Topics include the prorogation (and subsequent recall) of Parliament, the Amazon rainforest fire and the climate strike. Boris Johnson welcomes a new member of the family (his dog Dilyn) and waves goodbye to another (his brother Jo). Plus, it’s last orderrr orderrrrs for John Bercow, Donald Trump faces impeachment, and we hear about some Supremely relevant interventions. There’s also some feisty animal stories, as seagulls attack and a Russian naval vessel is sunk by a rogue walrus…

Providing some welcome light relief are newsreaders Neil Sleat, Alan Smith, Susan Rae and Diana Speed, who read out a selection of humorous press cuttings sent in by listeners.