Nicholas St. North and the Battle of the Nightmare King 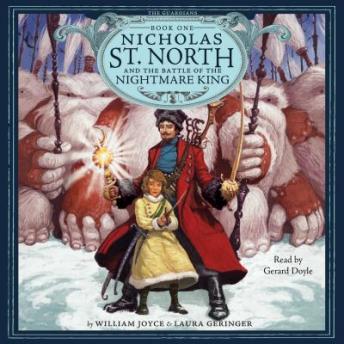 Forget naughty or nice—this is a battle of good vs. evil.

Discover the origins of St. Nick and follow along as the Guardians start their quest to rid the world of nightmares in the first Guardians chapter book from Academy Award winner William Joyce that inspired the beloved film, The Rise of the Guardians.

Before SANTA was SANTA, he was North, Nicholas St. North—a daredevil swordsman whose prowess with double scimitars was legendary. Like any swashbuckling young warrior, North seeks treasure and adventure, leading him to the fiercely guarded village of Santoff Claussen, said to be home to the greatest treasure in all the East, and to an even greater wizard, Ombric Shalazar. But when North arrives, legends of riches have given way to terrors of epic proportions! North must decide whether to seek his fortune…or save the village.

When our rebellious hero gets sucked into the chaos (literally), the fight becomes very personal. The Nightmare King and his evil Fearlings are ruling the night, owning the shadows, and sending waves of fear through all of Santoff Clausen. For North, this is a battle worth fighting…and, he’s not alone. There are five other Guardians out there. He only has to find them in time.

Nicholas St. North and the Battle of the Nightmare King