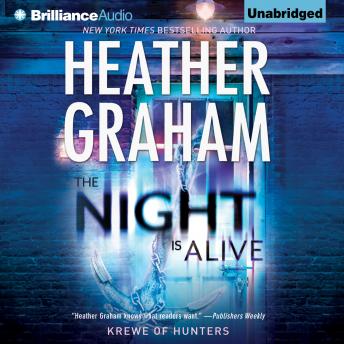 The Night Is Alive

Midnight in Savannah... It’s a city of beauty, history…hauntings. And one of the most haunted places in Savannah is a tavern called The Dragonslayer, built in the 1750s. The current owner, Gus Anderson, is a descendant of the original innkeeper and his pirate brother, Blue. Gus summons his granddaughter, Abigail, home from Virginia, where she’s studying at the FBI Academy. When she arrives, she’s devastated to find him dead. Murdered. But Abby soon learns that Gus isn’t the only one to meet a brutal and untimely end; there’ve been at least two other victims. Then Captain Blue Anderson starts making ghostly appearances, and the FBI’s paranormal investigation unit, the Krewe of Hunters, sends in Agent Malachi Gordon. Abby and Malachi have a similar ability to connect with the dead…and a similar stubbornness. Sparks immediately begin to fly — sparks of attraction and discord. But as the death toll rises, they have to trust each other or they, too, might find themselves among the dead haunting old Savannah!