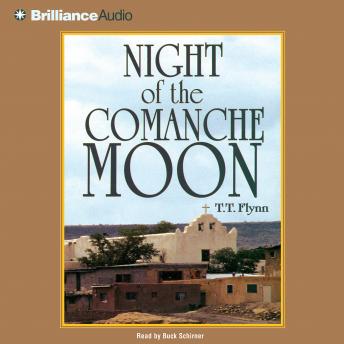 Night of the Comanche Moon

Four men's destinies are chained to the huge water wheels irrigating the great rancho of Don Alfredo Correon de Leon y Delgado, deep in Chihuahua. John Hardisty, a cheated prospector, Geoffrey Carruthers, a rather proper English rancher, the crazed Irishman, O'Meara, and Juanito Tomás, son of a powerful Comanche chief, work as slaves turning the wheels, each an innocent captured by Don Alfredo's private army. Hardisty and O'Meara are loners who are not missed but Juanito's father vows revenge and release for his son while Carruthers' sweet and brave sister, Ann sets out on a perilous journey searching for him after his disappearance. The fierce Comanches raid the hacienda to free Juanito just after Ann has arrived there to inquire about Geoffrey. The prisoners escape, and in a bargain with Chief Tomás, Hardisty rescues Ann from Don Alfredo's clutches. Hardisty must claim her as his "woman" to protect her from the Indians, something the highborn Ann scorns. After her injured brother dies, she must trust Hardisty as they escape across the desert with the bloodthirsty Mexicans behind them and the fearsome Indians in front of them...or perish.

Night of the Comanche Moon

This title is due for release on November 25, 2007
We'll send you an email as soon as it is available!