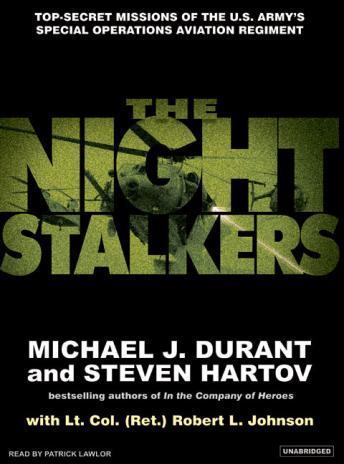 From the authors of the bestselling In the Company of Heroes come the thrilling, never-before-heard stories of the Army's elite aviation unit, the most daring and professional helicopter crews in the world.

In his first book, Michael Durant told his harrowing tale of being shot down in his Blackhawk over Mogadishu and held captive by a Somali warlord. It was a remarkable account, particularly because Special Operations pilots are notoriously reticent-they don't talk about their missions, at least not to anyone outside their small community. But now, with the publication of The Night Stalkers, Durant and Steven Hartov shed a fascinating light on these mysterious super commandos and take readers into a world they have only imagined.

From Iran to Grenada to Iraq, the 160th SOAR (A) has been at the point of the spear and in the thick of combat, delivering and supporting Delta operators, Rangers, and SEAL teams to any target, at any point on the globe, in all weather-night or day. Simply put, they are the best of the best, and here for the first time are their hair-raising true stories of battle, capture, victory, and loss.