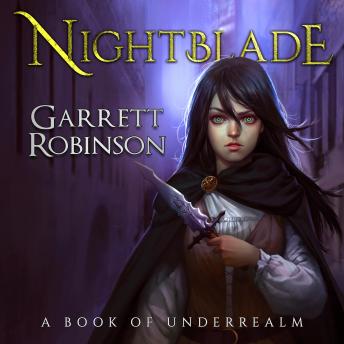 Nightblade: A Book of Underrealm

Loren's dagger holds incredible power-but something keeps her from using it.
Loren dreams of escaping her cruel parents and becoming a great thief: Nightblade, a warrior of darkness and a champion of the light. Following the fugitive sorcerer Xain out of her forest home, she wears a stolen noble's cloak of fine black cloth and carries a dagger the world has not seen in centuries-a blade that can turn enemies to allies when she least expects it.

Yet something keeps her from using that dagger to take a life.

Soon she crosses paths with the smuggler family of Yerrin, invoking their wrath by stealing their most precious treasure. Yerrin's reach is long, and they will not stop until they silence Loren forever.

If she can survive, Loren may become the most infamous thief in the world. But if she fails, she will be only the first to burn in a war that threatens all the nine lands.

'People should check out Garrett, he is an excellent vlogger and writer.' - Hank Green

'Robinson is a skilled author, particularly when creating interesting female characters. He has oodles of talent and is destined for great things.' - Shen Hart, TheReviewHart.com

JOIN TENS OF THOUSANDS OF READERS ON AN EPIC ADVENTURE.

Nightblade: A Book of Underrealm