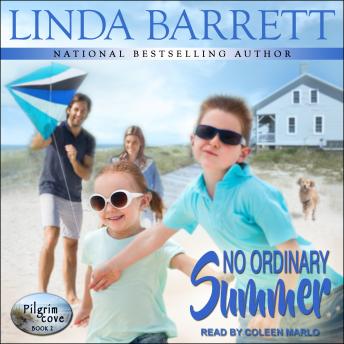 Pilgrim Cove-where love can be as powerful as the ocean next door.

On the surface, Pilgrim Cove seems like any other coastal town. Picturesque and peaceful with long stretches of unspoiled beach, fresh ocean breezes and the sense of time passing slowly.

However, only in Pilgrim Cove live a group of friends called the ROMEOs whose sole aim to take care of the town. Only in Pilgrim Cove stands a unique house right on the beach, Sea View House. A very special place-some say magical-to the people who reside there each season. And only in Pilgrim Cove, are strangers welcomed while everyone else takes a front row seat as a love story unfolds.

Fun is what Shelley Anderson is trying to provide for her two young children when she rents the first floor of Sea View House a year after a painful divorce. The kids haven't been adjusting well, and the house is perfect.

She's not sure about perfection, however, after she meets Daniel Stone, the man who's renting the top floor of the house. A man who's trying to find his balance after losing his wife. Her neighbor definitely wants to be left alone. He's less than thrilled by the instant rapport between his beautiful golden retriever and her two active kids. And he's definitely shaken by the rapport that springs up between himself and Shelley.

When Shelley's ex shows up, threatening to take the kids, Shelley must protect her little family while also protecting her budding happiness with Dan.

With their painful pasts, will Shelley and Daniel find the courage to love again? It's a question only they can answer.