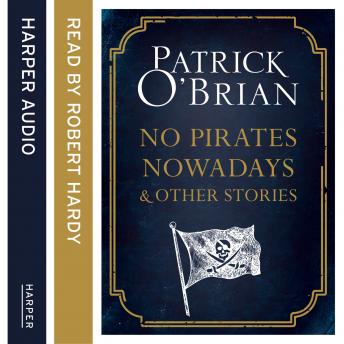 No Pirates Nowadays and Other Stories: Three Nautical Tales

Noughts and Crosses:
When Sullivan and Ross decide to go shark fishing among the atolls of the Great Barrier Reef little do they know what awaits them. With their schooner beached for cleaning they take a small whaler out to sea, but when the very devil of a storm turns the whole of the sea white, it drives them to the nearest atoll for shelter. It is only when they set out once again that they discover the seas are now filled with sharks, driven to a bloodlust by the smell of their butchered fellows that clings to the whaler. Becalmed and surrounded by the world's most fearsome predators, Sullivan and Ross discover that the hunters have become the hunted.

Two's Company:
The lighthouse was one of the most lonely in the world, guarding a dangerous reef in the cold northern seas. It therefore seemed a good idea to Sullivan and Ross that they both be its keepers; after all, two's company. But long months of isolation and boredom can test even the stoutest of friendships. So when a great storm deposits the carcass of a huge whale on the rocks, attracting to it flocks of hungry seabirds and packs of deadly sharks, and later the arrival of two unexpected guests, it provides the two friends with a welcome distraction from their tedium. Yet as the months drag on, they find that there is only so long that man can live in peace with his fellow.

No Pirates Nowadays:
As their schooner inches through the dense yellow fog of the northern Pacific, Ross is beginning to regret agreeing to Sullivan's latest plan. Their search for the island of Sakhalien, to hunt for precious sea-otters, is leading them nowhere. The appearance of a fellow ship should be cause to lift their mood, yet the captain and swarthy Malay crew of the Santa Maria leave Ross feeling all the more uneasy. But when their paths cross once again it is Sullivan's nephew, Derrick, who has good cause to doubt that there are no pirates nowadays.

No Pirates Nowadays and Other Stories: Three Nautical Tales