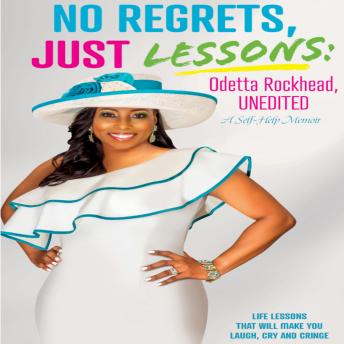 Born into a poor family in rural Jamaica to a teenage mother and an infamous father, Odetta has had a life that is nothing short of a miracle. She lost her father when she was six to criminality in his bid to escape the authorities. She did not graduate from high school, was a college dropout who was pregnant twice by age 17, once from sexual abuse resulting in an abortion that she thought left her sterile. Despite her many life lessons, by age 25, Odetta became a Vice President in a US Fortune 500 company that is today Xerox and built her first mansion for her extended family to replace the dilapidated board house she grew up in. That was only the beginning.

‘No Regrets, Just Lessons: Odetta Rockhead, UNEDITED’ (NRJL) is a self-help memoir and a strategy for success that will resurrect dreams, ignite passion and renew purpose. “It’s raw, gut-wrenching, real, soul-provoking, and brutally authentic,” says one reader. This gorgeous photographic narrative explores topical issues to include sexual abuse, abortion, rape, racism, ageism, sexism, homosexuality, promiscuity, spirituality, criminality, love, divorce, and tragedy. But it is not always heavy as it is littered with humor and moments that make you want to yell, “You go girl.” The 472 pages of this binge-worthy story of triumph feature 12 life lessons (chapters), critical to goal achievement, typically overlooked by schools and rarely taught by parents. Procuring a copy of this success strategy will give owners access to 12 months of complimentary workshops like no other that will feature accomplished presenters, refreshment, and entertainment. To visually, intellectually, and emotionally engage the reader, this portrayal of Odetta’s life is available in full color.