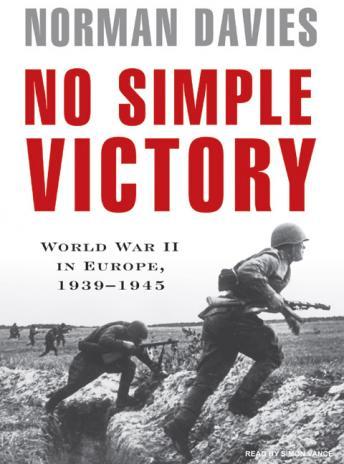 If history really belongs to the victor, what happens when there's more than one side declaring victory? That's the conundrum Norman Davies unravels in his groundbreaking book No Simple Victory. Far from being a revisionist history, No Simple Victory instead offers a clear-eyed reappraisal, untangling and setting right the disparate claims made by America, Great Britain, France, and the Soviet Union in order to get at the startling truth.

In detailing the clash of political philosophies that drove the war's savage engine, Davies also examines how factors as diverse as technology, economics, and morale played dynamic roles in shaping battles, along with the unsung yet vital help of Poland, Greece, and the Ukraine (which suffered the highest number of casualties). And while the Allies resorted to bombing enemy civilians to sow terror, the most damning condemnation is saved for the Soviet Union, whose glossed-over war crimes against British soldiers and its own people prove that Communism and Nazism were two sides of the same brutal coin.

No Simple Victory is an unparalleled work that will fascinate not only history buffs but anyone who is interested in discovering the reality behind what Davies refers to as 'the frozen perspective of the winners' history.'

This title is due for release on September 20, 2007
We'll send you an email as soon as it is available!