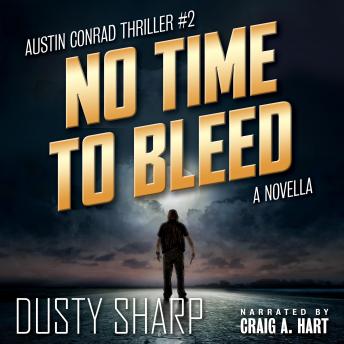 Craig A. Hart
A free trial credit cannot be used on this title

A lone biker on the open road. A crew of murderous thugs in hot pursuit. The hunters become the hunted along a lonely stretch of desert asphalt.

The notorious Rattlers motorcycle club didn’t have an official exit policy. So Austin Conrad wrote his own when he decided to get the hell out. Now he’s the target of the MC’s ruthless president, who’s hell-bent to silence Austin to keep his own dark secrets buried. Set along the back roads of southern California’s Mojave Desert, the story comes to its thrilling climax among the abandoned ghost town of Amboy. When Austin is waylaid by a hit squad from a rogue faction of the club, they learn the hard way that there’s more to Austin than motorcycles and petty crime.

No Time To Bleed is the action-packed second installment in the highly acclaimed Austin Conrad series. This quick-paced story ramps up the action and tests the mettle of anti-hero Austin Conrad, while setting the stage for further adventure and mayhem.

NOTE: This Novella is a 'Quick Listen' and priced accordingly. WARNING: Contains violence, profanity and irreverence, in equal measure.