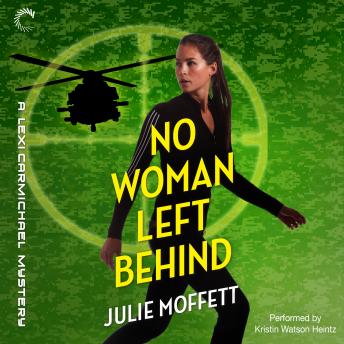 No Woman Left Behind: A Lexi Carmichael Mystery, Book Six

My mother's life goal has been to see me, geek extraordinaire Lexi Carmichael, happily married. So bringing my first boyfriend, Slash, home for dinner has me hyperventilating. Things get a lot worse when bullets start flying over our corn chowder.

Now the entire alphabet soup of government agencies want my help finding the man behind the attack—a cyber mercenary I foiled on my last case, Johannes Broodryk. He wants revenge and he’s taken something of mine to ensure I’ll play, so it’s game on. But the government has its own agenda and Slash is not on board with the plan. Things are a bit bumpy in paradise.

Although I'm more comfortable with computer code than commandos, I've been assigned a team of Navy SEALs to help bring Broodryk down. The question is, will they survive me long enough to solve his cryptic puzzles and save the day?

Don’t miss Lexi’s first adventure in No One Lives Twice!.

No Woman Left Behind: A Lexi Carmichael Mystery, Book Six