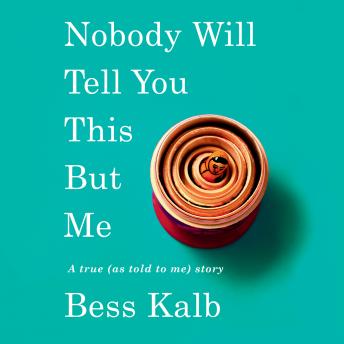 Nobody Will Tell You This But Me: A true (as told to me) story

ONE OF THE BEST BOOKS OF THE YEAR:
VOGUE • FORBES • BOOKPAGE • NEW YORK POST • WIRED

“I have not been as profoundly moved by a book in years.” —Jodi Picoult

Even after she left home for Hollywood, Emmy-nominated TV writer Bess Kalb saved every voicemail her grandmother Bobby Bell ever left her. Bobby was a force—irrepressible, glamorous, unapologetically opinionated. Bobby doted on Bess; Bess adored Bobby. Then, at ninety, Bobby died. But in this debut memoir, Bobby is speaking to Bess once more, in a voice as passionate as it ever was in life.

Recounting both family lore and family secrets, Bobby brings us four generations of indomitable women and the men who loved them. There’s Bobby’s mother, who traveled solo from Belarus to America in the 1880s to escape the pogroms, and Bess’s mother, a 1970s rebel who always fought against convention. But it was Bobby and Bess who always had the most powerful bond: Bobby her granddaughter’s fiercest supporter, giving Bess unequivocal love, even if sometimes of the toughest kind. Nobody Will Tell You This But Me marks the creation of a totally new, virtuosic form of memoir: a reconstruction of a beloved grandmother’s words and wisdom to tell her family’s story with equal parts poignancy and hilarity.

Nobody Will Tell You This But Me: A true (as told to me) story