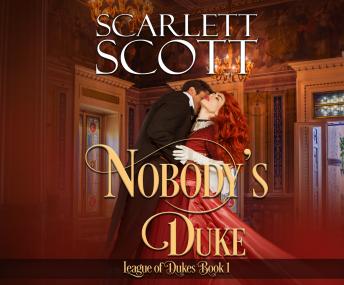 When the dangerous men who killed her husband in a political assassination threaten Ara, Duchess of Burghly, the Crown assigns her a bodyguard. But the man charged with protecting her is no stranger. He's Clayton Ludlow, the bastard son of a duke and the first man she ever loved. Eight years after he took her innocence and ruthlessly abandoned her, he's back in her drawing room and her life. This time, she's older, wiser, and stronger. She will resist him at any cost and make him pay for the past. She's the only woman Clay ever loved and the one he hates above all others. When Ara brutally betrayed and deceived him, leaving him with a scarred face and a bitter heart, he devoted himself to earning his reputation as one of the Crown's most feared agents. He wants nothing more than to finish his assignment so that he can remove all traces of her from his life forever. But walking away from her for good won't be as easy as he thinks. As secrets are revealed and danger threatens Ara, Clay discovers that the truth is far more complicated than deceit. Once she's back in his arms where she belongs, he'll wage the biggest fight of all to keep her there.