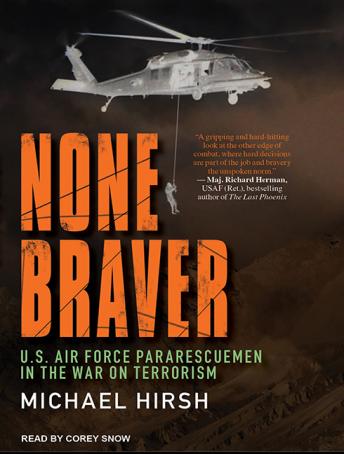 None Braver: U.S. Air Force Pararescuemen In The War On Terrorism

From award-winning journalist and combat veteran Michael Hirsh comes the thrilling inside story of the Air Force's pararescue operations in Afghanistan. The first journalist to be embedded with an Air Force combat unit in the war on terrorism, Hirsh flew from Moody Air Force Base, Georgia, with the 71st Rescue Squadron to their expeditionary headquarters at a secret location in Central Asia.

Unparalleled access to the pararescue jumpers-or PJs-as well as to the courageous men and women who fly them where they have to go, often under enemy fire, allowed Michael Hirsh to uncover incredible stories of courage. Among them: the drama of a plane crash at 10,000 feet in the Hindu Kush mountains, where PJs climb with hundred-pound packs through chest-deep snow to rescue the crew; the tension of an unprecedented nighttime combat parachute jump into the middle of an Afghan minefield; the heartbreak during Operation Anaconda, when seven American fighting men die, including the first PJ killed in combat since Vietnam.

This title is due for release on June 17, 2013
We'll send you an email as soon as it is available!