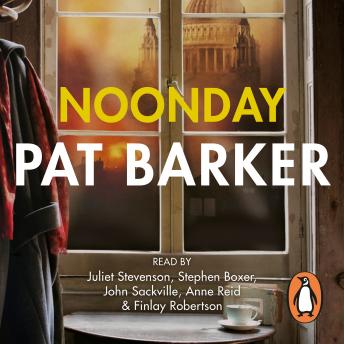 The final novel in Pat Barker's acclaimed 'Life Class' trilogy - an unforgettable story of art and war, from one of our greatest writers on war and the human heart

'Barker's command of detail and gift for metaphor are as sharp as ever... Noonday is in the first rank' Mail on Sunday

'[There is] no end to her talent in describing how conflicts rupture the soul' Arifa Akbar, Independent

London, the Blitz, autumn 1940. As the bombs fall on the blacked-out city, ambulance driver Elinor Brooke races from bomb sites to hospitals trying to save the lives of injured survivors, working alongside former friend Kit Neville, while her husband Paul works as an air-raid warden. As the bombing intensifies, the constant risk of death makes all three of them reach out for quick consolation. Old loves and obsessions re-surface until Elinor is brought face to face with an almost impossible choice. Writing about the Second World War for the first time, Pat Barker brings the besieged and haunted city of London into electrifying life.