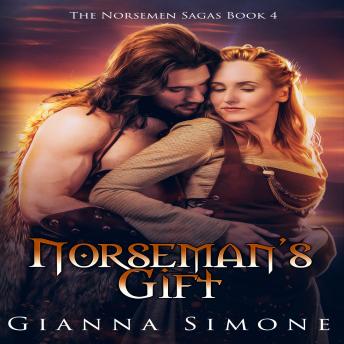 
Having spent almost all her life under the careful tutelage of the Seeress who has raised and trained her, Katrín anticipates her day of freedom, when she becomes a full Seeress in her own right. Not only does she possess skills as Völva, a wand woman, but also as Spákona, a prophet woman who receives visions and messages from the gods. Katrín looks forward to building her own retinue, with the hopes of bringing prosperity to many. Yet, as that day grows closer, doubts about her mistress arise and spur questions that demand answers.


Compounding her worries are the dreams where she is haunted by a virile warrior, one who inspires longing and desire. Katrín doesn't understand the meaning of these dreams, since the conditions for her to retain her powers require her to remain pure and innocent of men. When she comes face to face with her dream warrior, she is overcome by powerful, lust-inspiring visions.


Since being publicly betrayed, Hradi has despaired of ever finding a woman to trust. He is suspicious of the arrival of the Völur, the group of witches claiming to bring blessings from the gods. Because the young maiden faints at the sight of him, he is certain she fears him, even as he is drawn to her innocence.


Concerned Katrín's mistress intends harm, Hradi makes a deal that allows him time alone with the young witch, far from the watchful eye of her guardian, in the hopes of learning the truth of their intentions. Instead, he soon realizes the innocent Seeress understands him more than anyone else ever has and forces him to face the doubts that have plagued him for years.


Secrets threaten to destroy their fragile trust, and the hope they share for a possible future together. Will they discover the truth, before it's too late?


Featuring A Kinky Twist on History! love scenes, including bondage and spanking!