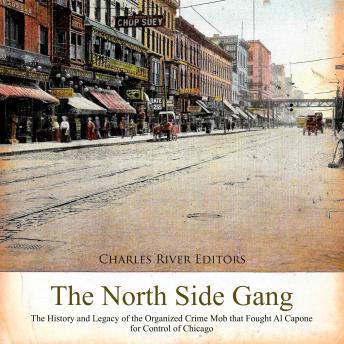 The North Side Gang: The History and Legacy of the Organized Crime Mob that Fought Al Capone for Control of Chicago

20th century Chicago was an ideal breeding ground for organized crime. A buzzing circuit board dotted with towering skyscrapers, brick buildings, worker's cottages, and an eclectic collection of greystone manors, the Windy City was further decked out with electric entertainment districts, the theaters, clubs, brothels, restaurants, and niteries that lined its streets. The city was illuminated by dazzling marquees and light-up signage, and enlivened by the muffled medley of midnight chatter and big band music seeping out of the nightspots. Those who ambled along the boardwalks flanking the Chicago River were greeted by moored commercial fishing boats bobbing in the water, as well as bustling stalls stocked with trout, salmon, and rainbow smelt.
The nostalgic factor of this particular era is par for the course. Lower those rose-tinted glasses, however, and the harsh, unvarnished reality of life in Chicago of yesteryear becomes apparent. It was, for starters, as much of a thriving, industrial nirvana as it was a harrowing haven for criminality and corruption. There was indeed a blossoming "mosaic" of cultures, the city often referred to as a "latter-day Tower of Babel," but the various groups of people were heavily segregated, and their neighborhoods were both terrorized and defended by homegrown gangs. Justice and morality seemed to be almost foreign concepts at this point in time, for politicians, judges, and law enforcement of all ranks were widely available for purchase.
The rise of Chicago's gangland can be attributed to a number of factors. First, there was the sudden explosion in its population, which saw an influx of immigrants - mainly from eastern and southern Europe, as well as Americans from neighboring and faraway states - teem into the city in search of promising job opportunities and a better life. The abrupt inundation of permanent citizens rendered the already suffering policeman to civilian ratio out of kilter, and the authorities' control of the city became further unzipped. Moreover, children and impressionable youths were regularly exposed to the overwhelming and unblushing presence of organized crime, meaning that the transitions of petty thieves and minor-league thugs to career crooks and full-time gangsters were only natural segues. The privileged pursued politics, medicine, law, and other respectable professions, but the poor folks, set several steps back by their limited resources, turned to crime. Plenty were desperate to feed their families and cheat the unjust system.
On February 14, 1929, members of the North Side Gang arrived at a warehouse on North Clark Street in Chicago, only to be approached by several police officers. The officers then marched them outside up against a wall, pulled out submachine guns and shotguns, and gunned them all down on the spot. A famous legend is that one of the shot men, Frank Gusenberg, dying from 14 gunshot wounds, told police that nobody shot him. Though Gusenberg's statement is probably apocryphal, nobody opened their mouths. Nobody was ever convicted for the "Saint Valentine's Day Massacre," the most infamous gangland hit in American history, but it's an open secret that it was the work of America's most famous gangster, Al Capone. While the North Side Gang is not as infamous as Capone's mob, the fact that the North Siders were the targets indicate just how powerful Capone's rivals were. Indeed, members like Bugs Moran would carry on a rivalry with Capone that lasted upwards of a decade.
The North Side Gang: The History and Legacy of the Organized Crime Mob that Fought Al Capone for Control of Chicago profiles how the group rose in the criminal underworld, and all the controversies that ensued. Along with pictures of important people, places, and events, you will learn about the North Side Gang like never before.

North Side Gang: The History and Legacy of the Organized Crime Mob that Fought Al Capone for Control of Chicago