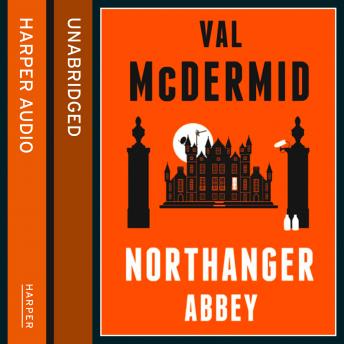 Jane Austen in the hands of queen of crime, Val McDermid. Get ready for a very different Northanger Abbey.

Seventeen-year-old Catherine ‘Cat’ Morland has led a sheltered existence in rural Dorset, a life entirely bereft of the romance and excitement for which she yearns. So when Cat’s wealthy neighbours, the Allens, invite her to Edinburgh Festival, she is sure adventure beckons.

Edinburgh initially offers no such thrills: Susie Allen is obsessed by shopping, Andrew Allen by the Fringe. A Highland Dance class, though, brings Cat a new acquaintance: Henry Tilney, a pale, dark-eyed gentleman whose family home, Northanger Abbey, sounds perfectly thrilling. And an introduction to Bella Thorpe, who shares her passion for supernatural novels, provides Cat with a like-minded friend. But with Bella comes her brother John, an obnoxious banker whose vulgar behaviour seems designed to thwart Cat’s growing fondness for Henry.

But Cat gets far more than she bargained for in this isolated corner of the Scottish Borders. The real world outside the pages of a novel proves to be altogether more disturbing than the imagined world within…