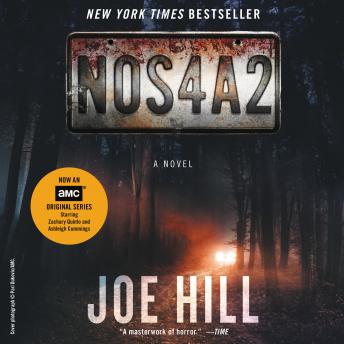 'A masterwork of horror.'— Time

Victoria McQueen has an uncanny knack for finding things: a misplaced bracelet, a missing photograph, answers to unanswerable questions. When she rides her bicycle over the rickety old covered bridge in the woods near her house, she always emerges in the places she needs to be.

Charles Talent Manx has a gift of his own. He likes to take children for rides in his 1938 Rolls-Royce Wraith with the vanity plate NOS4A2. In the Wraith, he and his innocent guests can slip out of the everyday world and onto hidden roads that lead to an astonishing playground of amusements he calls Christmasland. The journey across the highway of Charlie's twisted imagination transforms his precious passengers, leaving them as terrifying and unstoppable as their benefactor.

Then comes the day when Vic goes looking for trouble...and finds her way to Charlie. That was a lifetime ago. Now, the only kid ever to escape Charlie's evil is all grown up and desperate to forget. But Charlie Manx hasn't stopped thinking about Victoria McQueen. On the road again, he won't slow down until he's taken his revenge. He's after something very special—something Vic can never replace.

As a life-and-death battle of wills builds, Vic McQueen prepares to destroy Charlie once and for all—or die trying.

What a great story!! I enjoyed the premise of the book and the characters!! A twist on the typical vampire story!

I really enjoyed the narrator, and the story. I haven't seen the TV series. I don't know why, but I pictured Charlie M as Mr Burns, and his sidekick as Nelson with the loyalty of Smithers. I love stories that take me to other words. I hope we get a novel or series of novels., that have us take a journey across the St Nick Pkwy!

not at all what I expected, but was still a great listen. I needed something longer and engaging to listen to at work and this did that perfectly. the narrator did an amazing job and really helped shape the characters all by herself.

I rather enjoyed this title. I felt like the ending was slightly dragged out. But all and all, excellent writing and I would recommend reading it.

Great story and the narrator was awesome!

Great narration!! Hill is a great story teller, and this is a unique experience and excellent story.

I came here because of Loche & Key. I didn't know Kate Mulgrew did narration. She is amazing and makes this book come alive. Her Charles Manx performance is pure delight. Highly recommended.

I had high hopes for this book. Heart Shaped Box by Joe Hill was a good book, but this one was not on the same level. The narration became annoying. I wish I could give this book a better review, but I must be honest. Joe is a much better writer than this.

I have a new favorite author! I like how some of the story was told from a different view. I think the narration was excellent and I love Kate Mulgrew's voice variations between the characters.

This is my favorite author, but he seems to repeat himself a lot in this book. The narration was at times hard to listen towards the end, she read very fast. All together, It was enjoyable.

Book is great, narration was horrid. Never will get a book narrated by Kate Mulgrew again.

This book was one of my favorites so far this year. It's got an extreme creep factor for those who love horror and supernatural tales. At the same time, the author and narrator express extreme warmth and emotion that pull at your heart strings. I could not stop listening!