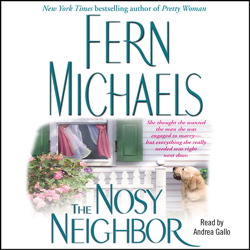 From New York Times bestselling author Fern Michaels comes an original novel about a young woman who discovers her fiancé isn't who he says he is, and the handsome but nosy neighbor who helps her decide what she'll do next.

Lucy Baker decided it was time to walk away from her high-flying legal career after she successfully defended yet another heinous criminal. Now, almost a year after her life-changing decision, Lucy has never been happier. Leaving New York City for the suburbs, tending to her garden and her dog, Lucy is making future plans with her fiancé and getting acquainted with her neighbors, including the handsome, exasperating one next door, Wylie Wilson.

But one day, everything changes. When FBI special agents confront Lucy with shocking revelations about her fiancé's secret double life, everything about her husband-to-be is cast in suspicion. Recovering from a freak accident that has left her with a heightened sense of intuition, and getting closer than she ever dreamed to Wylie, Lucy must determine who to trust—and fast, before someone breaks down her defenses and targets her...