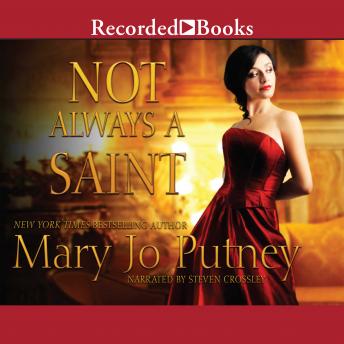 Not Always a Saint

'Adventure, passion and pure reading pleasure!' --Jo Beverley After the death of his sweetheart when he was at university, Daniel Herbert buried his grief in medical studies and his passion for healing. Viewed as a saint by those who know him, in his own mind he never quite manages to live up to his own high standards. Most men would be thrilled to learn they've inherited a title and estate from a distant relative, but Daniel is appalled because the burden of wealth will interfere with his medical calling. Warily he accepts that he must enter society and seek a wife-a sensible woman who can oversee his properties, leaving him free to continue his work. He does not expect to become intoxicated by a woman called the Black Widow, who is as mysterious as she is shockingly beautiful. Jessie Kelham's looks have always been a curse. Now alone with a young daughter and a perilous secret, she is in need of protection. But dangerously attractive Daniel Herbert is not the kind of husband she has in mind. If he recognizes her, the demons of her past will surely erupt. Yet they cannot keep apart-and soon they are drawn into a union that may bring joy-or shattering danger.

Not Always a Saint