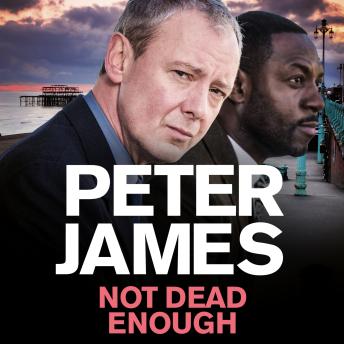 On the night Brian Bishop murdered his wife, he was sixty miles away, asleep in bed at the time. At least, that's the way it looks to Detective Superintendent Roy Grace who is called in to investigate the kinky slaying of beautiful young Brighton socialite, Katie Bishop.
Soon, Grace starts coming to the conclusion that Bishop has performed the apparently impossible feat of being in two places at once. Has someone stolen his identity, or is he simply a very clever liar? As Grace digs deeper behind the facade of the Bishops' outwardly respectable lives, it starts to become clear that everything is not at as it first seemed. And then he digs just a little too far, and suddenly the fragile stability of his own troubled, private world is facing destruction . . .
Not Dead Enough is the third bestselling title in the Roy Grace series from the number one bestselling author Peter James, read aloud by actor Neil Pearson.