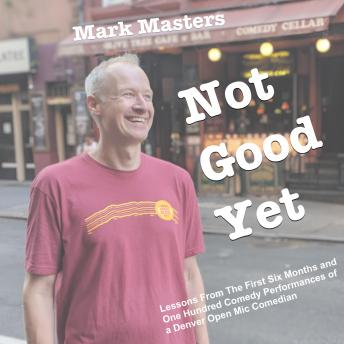 Not Good Yet: Lessons From The First Six Months and One Hundred Comedy Performances of a Denver Open Mic Comedian

Not Good Yet is a roller coaster ride of laughs, emotional struggles, and go-to insightful information from an aspiring comedian who attempted the impossible. To get good at comedy in just six months. He gets on stage as much as possible. He organizes comedy shows. He checks out comedy in New York and Los Angeles. He reads, listens and breathes all things comedy. And in the end, (spoiler alert) he fails to get consistently good. But there are glimmers of hope. The lessons he learns along the way will make you laugh, cry, and shake your head. Interviews with a comedy transplant, an open mic veteran of nearly a decade, and a comedy club owner complement his stories of accomplishment and defeat.


Mark Masters is even surer now than when he started, that calling himself a comedian is a stretch. In spite of that, he is definitely available to perform at your showcase, work event, or dog’s birthday party. He has performed stand-up comedy in six of the United States, including stage time in New York City and Los Angeles. Which sounds more impressive now than it will after you read this book. You can ask him anything by dropping a note at his website, markmasters.co (like Colorado, where he is based).

Excellent training manual for aspiring comedians. Loaded with hard earned nuggets. This is a rewarding read for a general audience as well, as one gets an appreciation for how difficult the road is, but it has many compensations. Comedy is hard, this book will ease many into attempting and succeeding at it. The reader had excellent diction, the material is easy to understand.