Not If I Save You First 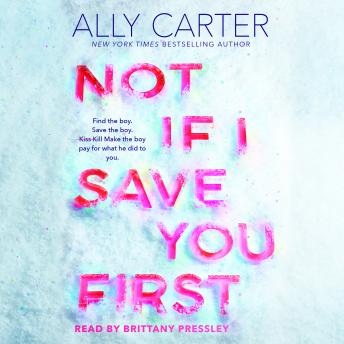 Bestselling author Ally Carter returns with an exciting stand-alone novel, about a girl stranded in the middle of the Alaskan wilderness with the boy who wronged her . . . as an assassin moves in.

Maddie and Logan were torn apart by a kidnapping attempt when they were young. They were only kids -- Logan's dad was POTUS and Maddie's father was the Secret Service agent meant to guard him. The kidnappers were stopped -- but Maddie was whisked off to Alaska with her father, for safety. Maddie and Logan had been inseparable . . . but then she never heard from him again.

Now it's a few years later. Maggie's a teenager, used to living a solitary life with her father. It's quiet -- until Logan is sent to join them. After all this time without word, Maddie has nothing to say to him -- until their outpost is attacked, and Logan is taken. They won't be out of the woods until they're . . . out of the woods, and Maddie's managed to thwart the foes and reconcile with Logan.

Not If I Save You First