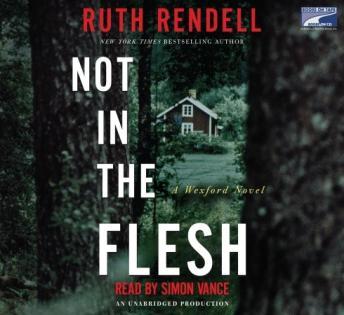 Not in the Flesh: A Wexford Novel

A new Chief Inspector Wexford mystery from the author who Time magazine has called “the best mystery writer in the English-speaking world.”

When the truffle-hunting dog starts to dig furiously, his master’s first reaction is delight at the size of the clump the dog has unearthed: at the going rate, this one truffle might be worth several hundred pounds. Then the dirt falls away to reveal not a precious mushroom but the bones and tendons of what is clearly a human hand.

In Not in the Flesh, Chief Inspector Wexford tries to piece together events that took place eleven years earlier, a time when someone was secretly interred in a secluded patch of English countryside. Now Wexford and his team will need to interrogate everyone who lives nearby to see if they can turn up a match for the dead man among the eighty-five people in this part of England who have disappeared over the past decade. Then, when a second body is discovered nearby, Wexford experiences a feeling that’s become a rarity for the veteran policeman: surprise.

As Wexford painstakingly moves to resolve these multiple mysteries, long-buried secrets are brought to daylight, and Ruth Rendell once again proves why she has been hailed as our greatest living mystery writer.

Not in the Flesh: A Wexford Novel