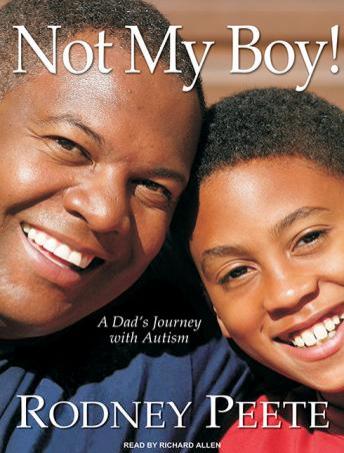 Not My Boy!: A Father, a Son, and One Family's Journey with Autism

'Like most fathers, I'd dreamt of doing all sorts of things with my son. I had so many plans, but when I was told my son was autistic, those plans seemed more like a fantasy. Well, eight years after that dreadful diagnosis, I am writing this book to let every father know that your plans for you and your son can still be a reality. It's just the path that takes you there that has to be altered.'

Autism affects four times as many boys as it does girls. For their fathers, expectations and hopes are drastically changed-NFL star Rodney Peete's were when his son R.J. was diagnosed at the age of three. After a period of anger and denial, an all-too-common reaction among fathers, Rodney joined his wife, Holly, in her efforts to help their son. With determination, love, and understanding, the family worked with R.J. to help him once again engage with the world. Eight challenging years later, R.J. has gone from the son one doctor warned would never say, 'I love you,' to a thriving, vibrant boy who scored his first soccer goal while his dad cheered from the sidelines.

Not My Boy!: A Father, a Son, and One Family's Journey with Autism