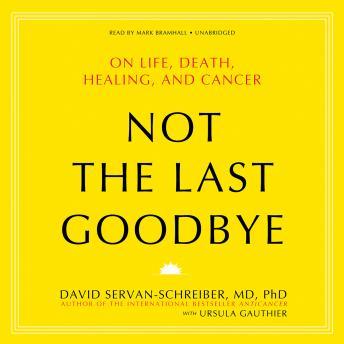 Not the Last Goodbye: On Life, Death, Healing, and Cancer

I knew the prognosis. Sooner or later, it would come back. I could slow down the inevitable; I could gain a few years. But there was nothing I could do to make this cancer disappear forever. So this was it. This was the relapse. The Big One.
Nineteen years after his original diagnosis, having taken up a worldwide mission toward hope and alternatives for those with cancer, David Servan-Schreiber submits to an emergency MRI that confirms his greatest fear: the brain cancer has returned. Here he shares his coming to terms with the news and, with courage and candor, examines his life from the point of view of one who understands that his illness is terminal. As the author of and spokesman for the Anticancer program, a doctor who has given hope to millions of readers and patients, David frankly acknowledges the challenges of adopting a fully “anticancer” lifestyle in today’s world and weighs the choices involved in doing so. Weaving in the stories of a number of clinical cases, he reaffirms the program that enhanced and extended his life and the lives of so many others. From nutrition and exercise to rest and meditation, the protocol he followed allowed him to live to the fullest for two decades beyond medical expectation.
The story he tells raises many of the most complex and personal questions about how we choose to live and how we prepare for death, striking a delicate balance between the limits of medicine and the hope that sustains us as we confront them. It is powerful, honest, and truly inspiring.

Not the Last Goodbye: On Life, Death, Healing, and Cancer