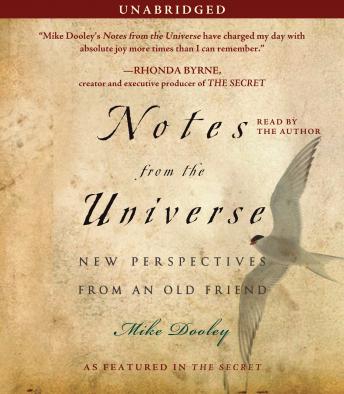 Notes from the Universe: New Perspectives from an Old Friend

What if the Universe were to send you frequent reminders of the absolute power you have over your life? Author Mike Dooley, an interpreter for the Universe, has done exactly that in Notes from the Universe—a collection of empowering, invaluable truths that can be read front to back or opened at random.

This first book in the Notes from the Universe trilogy teaches its readers to live a life far richer than they had previously thought imaginable.

The Universe is here to remind us that we are in control. To have the life you desire, all you have to do is ask. The secret to manifesting change is not focusing on the how but instead, the end result of what you’re after—the kind of life you want. Then, once you are truly focused, the Universe will conspire on your behalf.

Author Mike Dooley has turned over every stone, knocked on every door, and followed every impulse. He has immersed himself in the truths he needed to hear most; these were the kind of lessons he wrote about in his weekly emails. What started in 1998 as a little poem sent out once a week to 38 email addresses has evolved into an inspiring anecdote delivered to over 300,000 subscribers from 169 countries, each receiving a new note from the Universe five days a week. Mike Dooley serves as an interpreter for the Universe.

Notes from the Universe begins a three-volume set that is brimful with powerful affirmations that will have you thinking positively, feeling confident, and walking the path to personal success.

When readers discover the truths the Universe is unveiling in Notes from the Universe,they will begin living happier, more fulfilling lives.

Notes from the Universe: New Perspectives from an Old Friend