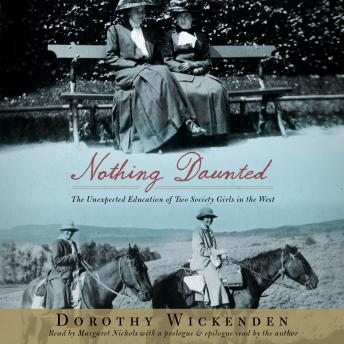 Nothing Daunted: The Unexpected Education of Two Society Girls in the West

The acclaimed and captivating true story of two restless society girls who left their affluent lives to “rough it” as teachers in the wilds of Colorado in 1916.

In the summer of 1916, Dorothy Woodruff and Rosamond Underwood, bored by society luncheons, charity work, and the effete men who courted them, left their families in Auburn, New York, to teach school in the wilds of northwestern Colorado. They lived with a family of homesteaders in the Elkhead Mountains and rode to school on horseback, often in blinding blizzards. Their students walked or skied, in tattered clothes and shoes tied together with string. The young cattle rancher who had lured them west, Ferry Carpenter, had promised them the adventure of a lifetime. He hadn’t let on that they would be considered dazzling prospective brides for the locals.

Nearly a hundred years later, Dorothy Wickenden, the granddaughter of Dorothy Woodruff, found the teachers’ buoyant letters home, which captured the voices of the pioneer women, the children, and other unforgettable people the women got to know. In reconstructing their journey, Wickenden has created an exhilarating saga about two intrepid women and the “settling up” of the West.

Nothing Daunted: The Unexpected Education of Two Society Girls in the West