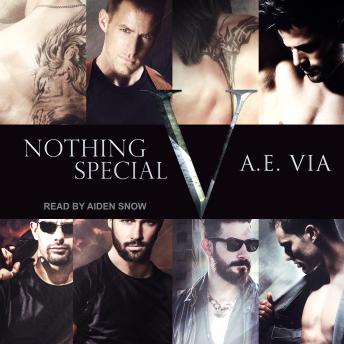 Atlanta's notorious narcotics task force is at it again. They are stronger, bigger, and better than ever. Especially when a city councilman sends RECON Marine, Edwin Steele-who's been blacklisted from his Oakland department-to join the team.

Steele was ready to hang up his shield. He was done fighting with bigoted bastards that couldn't respect the job. He was good at fighting; he just needed the right team to fight with. When his uncle-City Councilman, Rasmus Steele-shows him a video of God's team in action, he knows right away, it's where his nephew belongs in order to restore his faith.

Steele was skeptical about his new placement, but when he meets God's technology specialist/computer genius, 'Tech,' he's willing to give it his all, and he definitely shows and proves.

Tech is stunning. His sweater vest and khakis, a stark contrast to the blue-jeaned roughnecks he works with. A beautiful sheep amongst the wolves. Steel thinks there's no way the brilliant man would be interested in a hardhead like him, but Tech has a few badass hidden talents of his own and manages to surprise him . . . surprise all of them.

A. E. Via’s book are amazing and her knowledge of LE procedures are on point. I am so looking forward to the next book in the series and hopefully she will explore the SWAT team members. I am in love with Aiden Snow’s narrations to the point that i searched for more books narrated By him.

Nothing Special V is the fifth book in AE Via's Nothing Special series. I love these men so much and listening to them in audio is such a special treat. Aiden Snow has such a sexy voice and he is amazing at changing his voice to be all of these characters. His voice for Steele is so deep and growly and he got me all hot and bothered! This special task force of unstoppable men just got a little bigger with the addition of Edwin Steele. He's an ex-Marine with a classified background, but he needs to move on from his past. When he meets, Tech, on his first day he's enamored with the super sexy, geeky man. He's quickly brought into the fold of the team, and is loving the feeling of being with a band of brothers again. Shawn (Tech), loves his job, but he became a detective because he wants to work in the field. He needs to speak up and prove himself if he wants to show his bosses he can do the work. He's been on this team for a long time and he loves the comradery. He's also envious of his team and their partners. He wants to find that one day. Someone to go home to at night. Someone to share his life. Has he found that in sexy Steele? Tech loves Steele's dominating side, but he's no pushover. They aren't equally matched physically, but they are equals. I loved how Steele is turned on by Tech's snazzy clothes and Tech loves the way Steele smokes. I loved that I laughed so much and that Steels is forty-five years old! That made him more sexy to me! :) They are sexy, sweet, dangerous, hilarious and still more sexy! I loved the family and loyalty with this team. AE Via's writing is great and this story sucked me in from page one. I haven't read the entire series, but I'm hot for this team of men and I want more!

Love the book and story, wasn't able to get lost in the story as much with the narrator though. I like the voice, it just never really changes that much with the emotions. Overall a good job though.

A.E. Via writes alpha men soooo well, and Aiden Snow is absolutely delightful, with a great range of character voices, and an effortless performance of all the action parts, on and off the sheets (wink wink see what I did there?). Aiden Snow is fast becoming one of my favorite narrators. He performs all the alpha male voices so well, with just the right amount of gravelly, growly goodness woven into each voice. The Nothing Special series family has a lot of characters, with even more being introduced in this installment, and impressively, Snow keeps up with them all, only having some repetition of tone with some secondary and tertiary characters. Besides character voices, where Snow shines is in the smoothness of tone and pacing, engrossing the listener so deeply, it made this twelve and a half hour audio feel like it’s only a few hours long. Fans definitely won’t be disappointed. Told from multiple POV, Nothing Special V, more than any other in the series so far, felt like a love letter to fans from Via. Full of action, romance, and mystery, maybe the best thing about Nothing Special V is the ending, because it keeps the door of possibility wide open for many more stories in the series to come.

This title is due for release on October 20, 2019
We'll send you an email as soon as it is available!