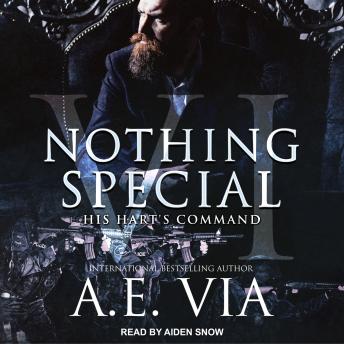 Nothing Special VI: His Hart's Command

Lennox Freeman (Free) is one of the best hackers in the world which has caused him to spend most of his life on the run. Never able to put down roots, he couldn't trust anyone not to take advantage of him, even his own family.

Ivan Hart has lived and bled one creed all of his life: To Serve and Protect. His intense focus and determination in law enforcement has led him to finally commanding his own team. He'd worked hard to put together a squad of badasses capable of backing up a very dangerous team of detectives. Being God and Day's last line of defense came with a lot of responsibility that he took very seriously.

After his divorce was final Hart turned right around and remarried his job. He had his good friends there in the office with him every day, so it was easier to ignore the few quiet hours he spent at home alone each night. He'd settled well into his new routine and was comfortable with it. Then God decided to disrupt everything by hiring another tech specialist for his department. A man whose brains, trendy looks, and voice would leave Hart tongue-tied and captivated at their first introduction.

His Hart's Command is the sixth book in the Nothing Special series. I'm a big fan of AE Via and I have read a few of her series' and she never disappoints. We know both Ivan Hart and Lennox Freeman and I knew their story was going to be fantastic! Hart is in charge of his own team. He's big, burly, hairy and sweet. Free is a tech genius and he has a huge crush on Hart. He's usually afraid if bigger guys, but there's something about Hart that just makes him feel safe. Hart looks for reasons to visit Free's department and he finally gets up the courage to show his interest. He's shy and it was so sweet! Free is more confident and forward than I thought he would be and I loved it! Hart's past left him afraid of being in a relationship. Self-conscious of his heard and his body hair. Free totally loves it! They give each other what they've been looking for. Safety, acceptance, appreciation, care and love. They seem to be an unlikely pair, but they have great chemistry and their banter had me laughing and sighing. They are also sexy and hot! We also get to see previous characters and team members we love. Amongst the action, suspense and team comradery, Hart and Free find their forever. Audio: I don’t know how Aiden Snow does it! I've listened to this entire series and I can tell who is talking just by the way he uses his voice. He makes them all distinct and he did fantastic with Free's subtle English accent. AE Via and Aiden Snow are a match made in heaven!

So few people write alpha men as well as A.E. Via. Coupled with the whiskey smooth tones Aiden Snow lays down and I had a wonderfully delightful audio experience, especially with Snow's great range of character voices and how well Via intersperses the action sequences with the romantic ones. And I love how there is plenty of romance here! It's impressive how well Snow keeps up with this huge cast of characters, only using some repetition of tone with lesser secondary and tertiary characters. But where Snow shines is in his pacing, making eight+ hour audio performances fly by. His Hart's Command is one of my favorites in the series. I love the action, romance, and the great hurt/comfort. His Hart's Command is the sixth book in the Nothing Special series and introduces new characters who make up a S.W.A.T. team who work closely with God and Day's team of detectives in the Atlanta Police Department. While it's part of the series and contains previously mentioned characters, it could be read as a standalone...but since I love this series I'm recommending you definitely pick up the others as well. 4.5 stars