Nothing to Lose, Everything to Gain: How I Went from Gang Member to Multimillionaire Entrepreneur 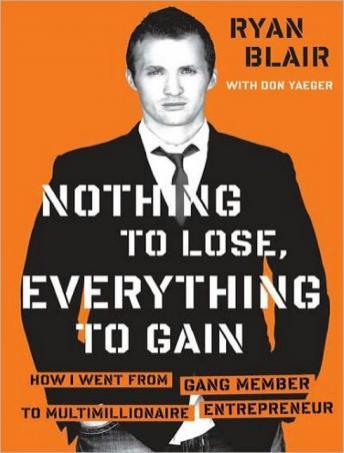 Ryan Blair knows about building a business from the ground up. Like many entrepreneurs he had no formal business education. But he had great survival instincts, tenacity, and, above all, a 'nothing to lose' mindset.

Blair's middle-class childhood came to an abrupt end when his abusive father succumbed to drug addiction and abandoned the family. Blair and his mother moved to a bad neighborhood, and soon he was in and out of juvenile detention, joining a gang just to survive.

Then his mother fell in love with a successful entrepreneur who took Ryan under his wing. With his mentor's help, Blair turned himself into a wildly successful businessman. He started his first company, 24/7 Tech, at the age of twenty-one, and since then has created and sold several companies for hundreds of millions of dollars.

Now Blair teaches listeners how to start and grow their own profitable businesses by following his often contrarian philosophies. For instance:

-In juvenile detention, if you let someone take your milk the first day, he'll take it every day. The same is true in business.

-When you're dealing with an investor's money, you have to act as if God Himself wrote you the check.

-Most business plans aren't worth the paper they're written on.

-Efforts don't pay the rent. Have no sympathy for employees who talk about how hard they're trying.

-Entrepreneurship is great because you can set your own hours-any seventeen hours of the day, seven days a week. But if you're doing what you love, it doesn't drain you as much as the nine-to-five death cycle.

This is an inspirational guide for people who are willing to put in the hard work, time, and dedication needed to see their vision through to the end. Blair shares lessons from his mentors and advice from his own life-changing experiences and provides a road map for entrepreneurial success.

Nothing to Lose, Everything to Gain: How I Went from Gang Member to Multimillionaire Entrepreneur