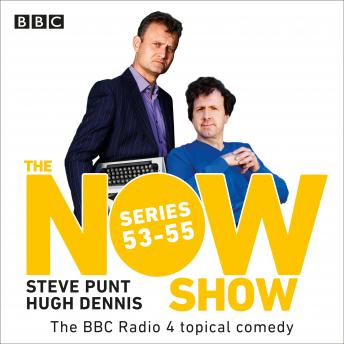 The Now Show is back, saving you from the trouble of keeping up with the news by providing a topical mix of stand-up, sketches, songs and interviews that tell you everything you need to know.

In these 20 episodes, presenters Steve Punt and Hugh Dennis are accompanied by a wealth of special guests including Phil Wang, Rose Matafeo, Beardyman, Ahir Shah, Sindhu Vee, Ken Cheng, Nicola and Rosie Dempsey (as Flo and Joan), Suzi Ruffell, Emma Sidi, Pierre Novellie and Lucy Porter (who also takes a turn as guest host). As ever, they give us their searing hot satirical take on subjects ranging from Trump, Brexit and the 2019 General Election to NASA spacewalks, social media and the Spice Girls reunion.

In addition, there's a special edition of The Now Show from the BBC Hub at the Edinburgh Fringe, hosted by Hugh Dennis and Marcus Brigstocke and featuring performers including Josh Berry, Karen Bartke, Jena Friedman, Alice Snedden and Jonny & the Baptists, as well as an interview with comedian and environmental economist Matt Winning.