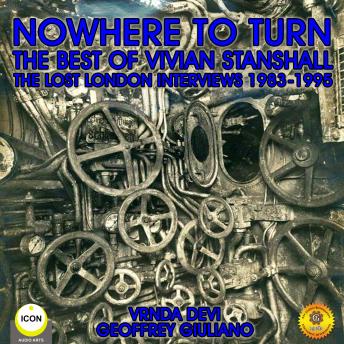 Nowhere to Turn - the Best of Vivian Stanshall

World exclusive, never before published long-lost interviews recorded in 1983 and 1995 with the author's close friend Vivian Stanshall.
Vivian, the headmaster of the Bonzo Dog Doo Dah Band as well as a singular author, poet, painter, actor, and iconic British eccentric. This unique audio book offers rare insight into the brilliant clockwork mind of this late British national treasure. Renaissance man Stanshall holds forth on a number of insightful topics relating to his turbulent life and enticing, inspirational, evergreen work. This in-depth production also includes a concise one-hour biological overview of Vivian's life as well as the personal remembrances of his friend and colleague Giuliano.
Also featured are rare outtake excerpts from an interview conducted by Geoffrey's late wife, Vrnda Devi, just days before Stanshall's mysterious, violent death. This wonderful, artful audiobook is an absolute must for all 1960s historians, scholars, pop fans, and lovers of British literature as well as all university and school collections.
Author Vrnda Devi was an inspired animal rights activist, proprietor of a popular food bank, an international charitable aid worker, an initiated devotee of Bhagavan Sri Krishna, a mother of four, and a loving wife. All of her life Vrnda selflessly cared for the poor and freely gave of herself in all things. In India she was known lovingly as "Mother Vrnda" to the many yogis and saints she compassionately served both there and at the eight-acre ashram/cow shelter she founded in Lockport, New York. Ms Devi passed away quietly at home in front of the deities of Sri Sri Radha Krishna on December 26, 2017. She was the humble first disciple of His Divine Grace Bhakti Hirday Mangalniloy Maharaj of Vrndavan and the founder of Sri Radhe International, The Spiritual Realization Institute, and Dasa Food for All. Ms Devi was also the author of 12 internationally popular books from 1984 to 2006.

Nowhere to Turn - the Best of Vivian Stanshall