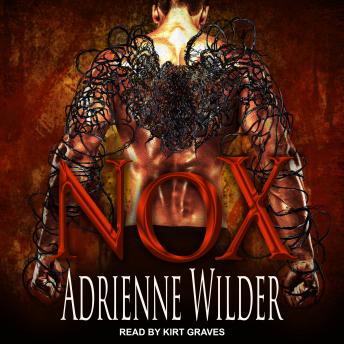 A nude man invades Luca Suarez's home and protects him from creatures who cannot exist. Creatures hunting him.

The stranger can't tell Luca why. He can't even tell Luca his name. He remembers nothing until the moment he sees Luca. The only hint Luca has to the stranger's identity is a tattoo on his wrist: N o X

Nox doesn't know who he is, but he's sure of three things, his memory loss is temporary, the monsters chasing Luca are called Anubis, and his Alpha, Koda, sent Nox to protect him. There's just one problem . . . Koda is Luca's brother who was murdered five years ago.

With each passing hour, Nox fills in the pieces painting an impossible truth. And with each passing hour, both men find themselves unexplainably attracted to each other. Something Luca is willing to embrace because he has nothing left to lose. And one Nox can't let happen because it could get Luca killed.

I have listened to books on this app for a couple of years and have never felt compelled to write a review before now. This book was so good on so many levels! Super intriguing! Steamy sexy times! Fascinating concepts! At no point did I ever blank out and have to rewind. In fact I was riveted to every word! I listened to the entire book in 2 days! I can’t wait for the second book to come out on audio. I have so many questions and I’m eager to be feed more mysterious little tidbits until the full story is told.

So many questions! This was a gripping story and I cannot wait to hear the rest.

I am so happy I found this book. Can not wait to see what comes next.

This was a very strange but very interesting take on the supernatural. Hopefully I will not have to wait long on the next book because I know it will likely be even better. Do not worry though you are fine to read this one. The story in this one is wrapped up enough that you will not get frustrated.

Adrienne Wilder takes us on a vivid and often times creepy journey in NoX, with a fresh sci-fi twist on shifters. Its supernatural flare and vivid imagery grabs hold and drags you from cover to cover. All sense of time is lost as the narration of Kirt Graves engulfs you as a welcome companion on this spine-chilling and intense ride. An extensive cast of characters combine to create an adventure of a lifetime. Luca, Nox, and Reese’s points of view seamlessly interweave to tell their story. There is so much occurring within an abundance of detail, that paying close attention to Kirt Graves’ suave delivery is completely necessary. Life has not been kind to Luca Suarez. At nineteen he has lost his mother, father and older brother, Koda, to tragic accidents while he himself battles cancer. Nox is a man of mystery. This hulking nude man enters Luca’s life in the nick of time to save Luca from death, not at the hands of leukemia, but from other worldly creatures. Where did he come from? Why does he just know that he must “Protect Luca”? Why can’t he remember anything? Over time the answers to these questions reveal themselves as we slowly learn details: his real name, his past, and the atrocities he has been subjected to. Dr. Reese Dante is one of the last remaining pioneer scientists on the super-secret New World Genetics Anubis project (hint… hint…). When his conscience can no longer endure the project’s disregard for its subjects, Reese severs his ties with New World Genetics. Riddled with guilt and remorse, he struggles to get his life back in order. As one of the few remaining scientists, he truly understands the gravity of what is happening. Even as my emotions ran amuck for Luca and Nox, my heart absolutely bled for this man. Two plots unfold simultaneously in NoX. Luca and Nox are on the run with one goal in mind, “Protect Luca”. While in parallel the military, which includes Reese, is following the trail of bodies left behind by the Anubis, the wolf-like creatures chasing Luca. As Nox’s memory begins to return, bringing with it the events leading up to this point, so does the realization of what his former colleagues have done dawns on Reese. The pull between Luca and Nox grows slowly as each day passes. Luca has never really had a life; it has always been about the leukemia. Nox’s need to protect Luca makes him hesitate. As his resolve slowly disintegrates and combines with Luka’s desire, it is replaced with a strong emotional bond. Here is where I chuckle slightly to myself: First I was ‘come on guys do the deed, the connection is there, you both feel it’. Then, it morphed into ‘OMG get off him’. Seriously though, Luca and Nox are a perfect match and I adore their relationship and there hawt interludes. NoX is definitely not for the squeamish, often times brutal and intense, it delivers a powerful impact. There are times when the science “stuff” might seem too be mind boggling, but it never is. Kirt Graves’ alluring delivery of even scientific gobbledygook only serves to enhance the depth and power NoX incites. It’s important to understand that the brutality is not only focused on murder, dismemberment and gore. The Anubis thrive on physical contact. More specifically, rough and often brutal sex with multiple partners. Holy crap is there an abundance of the getting down and dirty variety. Mystery and memory loss, death and destruction, science and greed place the fate of humanity in peril. The initial scientific intentions are altruistic, however, as time passes egos and personal gain seize control. The resulting impact leaves the protagonists in limbo with a longing for a peaceful future that may not be attainable. NoX ends at a decent break point, so not a cliffhanger but a new beginning.

Adrienne Wilder builds a dark and intriguing world, and Kirt Graves makes it come alive in the audio version of NoX. The characters, the story line, the romance! From the moment this one starts, the pace is fantastic, and I can’t think of a better way to enjoy it than by listening to the stunning audio version of NoX. Kirt Graves’ rough and gravelly voice is absolutely perfect for Nox. He’s forceful and domineering, but when the romance starts up in earnest? Ohmygod! Nox is a demon in the bedroom, and Kirt Graves absolutely nails it. Afraid and bewildered early in the story, Luca gradually evolves into a confident, capable young man, and Mr. Graves portrays this transition beautifully. The premise that scientists are exploring unorthodox ways to cure fatal illness, or even dabbling with resurrecting the dead, is frighteningly close to reality. Adrienne Wilder cleverly blends Egyptian lore with modern science and a touch of magic, to create an event that’s just close enough to possible to make my skin crawl. This is an intricate story, alternating between the present day and flashbacks to earlier events. Told from both Luca and Nox’s points of view, we get their perspectives on their growing understanding of the mystery, as well as their blossoming love affair. Wilder also includes Dr. Reese Dante’s story. As one of the original scientists on the project, his descriptions of how the Anubis Project developed are key to the story line. Reese is an intriguing character. I love his emotional account as he reveals previous events throughout the novel, and he has a strong sense of values and a huge heart. I can’t possibly review this novel without praising Adrienne Wilder’s incredible skill at writing erotic love scenes. The chemistry they create between Nox and Luca is intense, and the sex between these two men goes beyond explosive. NoX is an absolutely gorgeous romance. No one builds a better series than Adrienne Wilder, and with the way the story wraps up I’m hopeful more stories in this universe are on the way. I’d love to see where Nox and Luca go from here, but I’ve got a feeling we haven’t seen the last of Dr. Dante… fingers crossed!