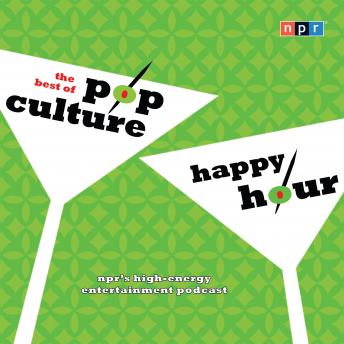 An energetic, fun-filled round table from NPR exploring the many ways entertainment intersects with day-to-day life. NPR's popular podcast features spirited roundtable discussions covering a wild and unpredictable landscape of pop culture subject matter, from the phenomenon of the fiasco (the result of ambition that exceeds competency) to “Pop Culture Carbon Dating” (why some cultural markers age well and others not at all). Hosts Linda Holmes, Stephen Thompson and Glen Weldon are joined by a parade of insightful commentators, each lending hilarious perspective and pop culture expertise to conversations that will deepen your appreciation for the modern cultural landscape-and leave you smiling. Featuring: • Pop Culture Debuts with Ari Shapiro • Public Radio Voices with Gene Demby and Tanya Ballard Brown • Nudity with Maggie Thompson • The Art of the Mixtape with Audie Cornish • Outtakes and Bloopers with Guy Raz • Movie Trailers with Bob Mondello • Profanity with Trey Graham • Fiascos with Gene Demby • Hollywood in the White House with Ari Shapiro • Pop Culture Carbon Dating with Audie Cornish