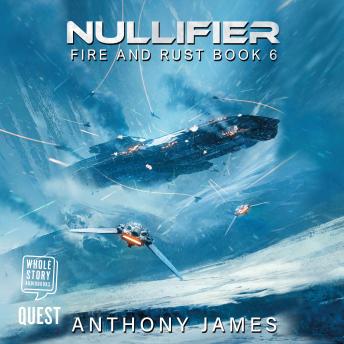 Nullifier is a fast-paced military sci-fi shooter filled with spaceships, guns, tech and warfare. It follows on from book 5 in the Fire and Rust Series: Refuge 9.
After a battle against the Raggers over planet Glesia, the spoils of war dangle in front of the bloodied allied fleet - in sight, but just out of reach. The wreck of a Sekar battleship and the intel contained within a subsurface alien facility could affect the outcome of a war which has so far claimed billions of lives. However, while the Raggers are defeated, they are not destroyed, and they are unwilling to give up the prize. What starts as a hard fight to claim invaluable alien tech turns into something with far higher stakes. The crashed battleship is called Nullifier and its control entity promises many things. Captains Jake Griffin and Tanner Conway will soon find that this mysterious craft has a mission of its own. A mission that requires a replacement for its dead crew.