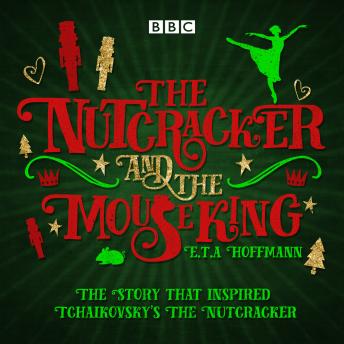 The Nutcracker and the Mouse King: A BBC Radio 4 full-cast dramatisation

It is Christmas Eve, and young Mary and Fred are opening presents from their godfather, Drosselmeier the toymaker. Mary’s favourite gift is a nutcracker soldier, and she is disappointed when his jaw breaks on a particularly hard nut.

She puts him away carefully, promising that Drosselmeier will mend him – and at that moment he seems to come alive. Surely she is just imagining things? But as the grandfather clock begins to chime midnight, all her toys spring to life! Led by the Nutcracker, they rush into battle with an army of mice who emerge from beneath the floorboards – including the seven-headed Mouse King…

Hoffmann's classic children’s tale is adapted by Brian Sibley (who also dramatised 'The Lord of the Rings' and 'The Chronicles of Narnia' for radio). Starring Tony Robinson as the Nutcracker, Edward de Souza as Drosselmeier, Eric Allen as the Mouse King and Angela Shaftoe as Mary, it is sure to delight fans of Tchaikovsy's famous ballet - and anyone who loves the magic of a good fairy tale.

Nutcracker and the Mouse King: A BBC Radio 4 full-cast dramatisation