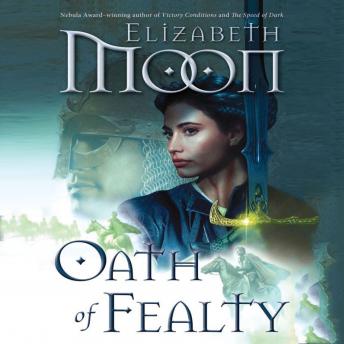 In the original trilogy starring Paksenarrion Dorthansdotter, headstrong daughter of a farmer on the north edge of the kingdom, Paks follows her dream of becoming a hero out of legend by running away to join the army. Military life and warfare aren't anything like she imagined . . . yet she holds to both her duty and her dreams. Sheepfarmer's Daughter, Divided Allegiance, and Oath of Gold tell of her rise to become the paladin who saves a kingdom. In this new trilogy, Paks's former comrades in Duke Phelan's Company assume new roles and the story turns to follow their adventures.

Thanks to Paks's courage and sacrifice, the long-vanished heir to the half-elven kingdom of Lyonya has been revealed as Kieri Phelan, a formidable mercenary captain who earned a title--and enemies--in the neighboring kingdom of Tsaia. Now, as Kieri ascends a throne he never sought, he must come to terms with his own half-elven heritage while protecting his new kingdom from his old enemies--and those he has not yet discovered.

Meanwhile, in Tsaia, Prince Mikeli prepares for his own coronation. But when an assassination attempt nearly succeeds, Mikeli suddenly faces the threat of a coup. Acting swiftly, Mikeli strikes at the powerful family behind the attack: the Verrakaien, magelords possessing ancient sorcery, steeped in death and evil. Mikeli's survival--and that of Tsaia--depend on the only Verrakai whose magery is not tainted with innocent blood.

Two kings stand at a pivotal point in the history of their world. For dark forces are gathering against them, knit in a secret conspiracy more sinister--and far more ancient--than they can imagine.